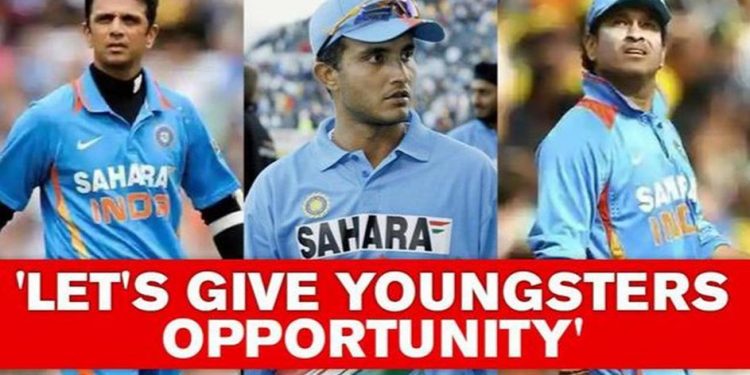 Hello everyone! We are here to talk about our Indian legends dressing room discussions on a public platform. Yes, you heard it right. This report was given by Lalchand Rajput to the media. Let’s see what more we can dig out.

ICC T20 2007 world champions team India gave us goosebumps moment by lifting the trophy in style under the leadership of another legend Mahendra Singh Dhoni who proved his talent at his young age by leading an inexperienced young Indian side. The Indian team was considered to be underdogs without batting maestro’s Sachin Tendulkar, Saurav Ganguly, Rahul Dravid at Johannesburg event.

It was then the wall of Indian cricket convinced Sachin and Saurav to be not a part of the team considering the growth and exposure of youngsters. Yes! You heard it right. This was reported by a trusted source by the team manager of the 2007 T20 side.

Rahul was then the captain who was leading the team in England and few came directly from England to South Africa to play the world cup. Thus, they were warmed playing overseas before the world cup event and Rahul came up with the idea of staying out from the young side along with other legends. They must have repented it after winning the world cup, told by Lalchand to media.

Read more: How to do a tarot reading for someone, not present

Although Sachin was unhappy with his fate of not winning a single world cup, even though, he was considered to be the cricket god. That dream came true in 2011 by lifting the world cup trophy. He was eagerly waiting for the moment and the team won in the first attempt.

Lalchand recalled his memory saying the atmosphere in the dressing room was really pumped up and positive. Dhoni always had this mantra in his mind to “not to take tension but to give”, although, he was aware of publicly criticizing the inexperienced team and it could have been worse if team India were not able to demonstrate such incredible performance outside the country. He focused and believed in his bench strength and never bothered about the public or media views.

India’s side hardly had one practice match before the big event, however, it was a good mixture of seniors and juniors and they gelled up well. Dhoni always thought 2 steps ahead with a plan B to outclass the opponent’s strategy.

He gave a lot of confidence like Ganguly did and worked a lot on drawing board like Dravid to keep a balanced side. The win in 2007 was a big achievement for Indian cricket globally post disappointing exit from 2007 ODI World Cup held in West Indies.

That’s a lot about cricket today. We will catch you back with more exciting news. Stay tuned.

Corona Has Killed Another Well-Famed Cricketer from Delhi: Sanjoy Dobal

Chiropractors Told to Stop Pretending They Can Treat Covid-19