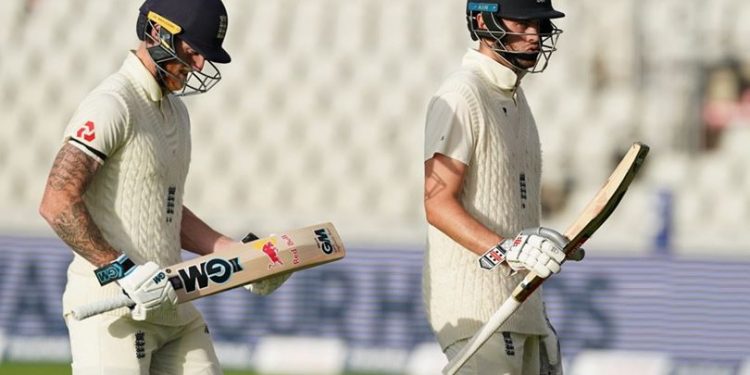 Test series between England and West Indies have been started and from the beginning, it is gaining the interest of viewers and fans. In the second match, Dom Sibley and Ben Stokes played an amazing inning scoring a century individually at Emirates Old Trafford. The partnership was of 260 runs which made a pile scoreboard for England and put pressure on the West Indies.

Ben Stokes is always in the headlines and this time he has played a fantastic inning of 176 runs making his 10th Test a hundred. Dom Sibley scored 120 in a nine-hour game. Their partnership and combined effort made a final total of 469 which is England’s highest opening innings score in the past three years. After Joe Root’s departure with 81 for three for the team, Sibley and Stokes held the game and played for 95 overs together which changed the game and put it in the hands of England.

Stokes inning included 17 fours, 2 sixes, and many more amazing shots. Sibley played patiently and helped Stokes raise the score of the team. Stokes was seen as less aggressive than usual but the all-rounder was in a stellar form.

Stokes scored his first 50 in 119 balls and second fifty in 136. But after his hundred, Stokes geared-up and reached from 100 to 150 in just 46 deliveries. Stokes was having a lucky day as Windies gave him chance for playing twice by letting him slip through their fingers. The first was delivered by Gabriel where Blackwood slipped a thick edge to burst through his hands when Stokes was on 141. Again Gabriel made a chance but this time Shai Hope, after a nice drive, fumbled up. Stokes lost his wicket doing a reverse shot against Kemar Roach where he was caught.

On the first day, Sibley scored 86 and was very patiently playing in the crease. He scored his hundred on 312th delivery with hitting 4 fours only. After his hundred, Sibley tried to gear-up but lost his wicket which was the start of regular falls of the wicket for the team.

15 Kitchen Appliances Every Kitchen Should Have

Epic buys the company behind God of War’s facial animations