Danny Drinkwater resumes training with Aston-villa amid fight with teammate 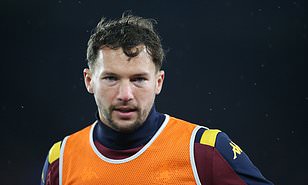 Danny Drinkwater is back training with Aston Villa after he was sent home for headbutting team-mate Jota before the epl was suspended indefinitely.

There are some suggestions that Villa were considering ending his loan spell early.

Danny Drinkwater is continuing to train with Aston Villa following his bust-up with team-mate Jota, days before the Premier League was suspended.

The on-loan Chelsea midfielder was sent home from the club’s Bodymoor Heath base after allegedly head-butting the Spaniard during a training session on March 10.

There were suggestions that Villa considered ending the arrangement in the aftermath of the incident, but Eplfantasy understands Drinkwater trained normally with his colleagues after they returned to Bodymoor Heath for small-group sessions this week. Relations with Jota are thought to be amicable.

Danny Drinkwater is continuing to train with Aston Villa following his bust-up with Jota
How often he will play for the club again is unclear, however. Premier League loan deals run until June 30, meaning if the season restarts on June 19 or June 26, there would be little chance for Drinkwater to make himself indispensable.

Villa are currently paying half of his £110,000-a-week salary after taking him on loan in January, with the 30-year-old due a £10,000 bonus if he plays a significant part in keeping Villa in the top flight.

Drinkwater faces a fight to rebuild his career after winning the Premier League title in 2016 and joining Chelsea for £35m in September 2017, but injuries and lack of trust from managers meant he made only 19 appearances in two years at Stamford Bridge. He spent the first half of the campaign on loan at Burnley but played only twice.

Drinkwater made four starts for Villa, failing to complete a single game, and was left on the bench for the final league fixture before the shutdown, Villa’s 4-0 defeat at Leicester on March 9.

An Everlasting Journey is Here, from the Taste of Chocolate to its Packaging!